Archive for the ‘Nicholas Hood’ Category 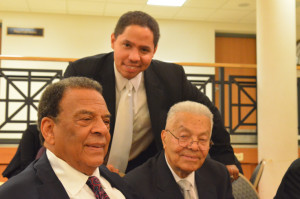 Some remembrances write themselves.  This one is being written through heavy grief because it is not only a memory of Nicholas Hood, but  long overdue grieving of my youth and someone who contributed majorly to who I am as a Christian today.

Nicholas Hood is in my heart and soul.

“Suffer the little children to come unto me …………….” was one part of Nicholas Hood’s ministry.  With a group of us in New Orleans, life would never be the same.  We integrated the Congregational Church’s summer camp in the Panhandle.  It was an incredible, life changing experience.  There were times around a camp fire when we heard, as young Black children, what young White children thought of those like us.  Stories of how the White children – teen agers – had been taught that integrated marriages produced spotted children.  Comments I have never forgotten.  That one stood out more than the rest because my grandfather had the genetic disease which causes one’s skin to turn from brown to milky white and I could see it spreading across his hands and in later years his face.  His father was Blackfoot Indian.  His mother was French.  I knew better than to believe the stories I heard around that camp fire, but that one got inside and it took some time before I was able to dig it out.    Nick Hood was there talking to all of us and going into detail on racism and how it works and spreads from one generation to the next.  Those were stories told to their children by parents who were full of fear and afraid their children might bring home a Black boy or girl friend and they were doing everything they could to prevent that and keep the color line unbroken.  What Nicholas Hood did for us, after that night around the camp fire, was to witness using the Gospel to put all of what we heard into a context which was powerful I can still hear parts of it.

Nicholas Hood was there at the end of that camping experience when we were on the way home and we all went into a diner to eat.  We had been so caught up in the experience of being together – White and Black – that the reality outside the camp had not been restored and we sat in the diner causing a bit of an uproar because Blacks were sitting at the counter waiting to be fed.  We were unaware of the sit-ins beginning to happen across the country.  We just wanted lunch.

Nicholas Hood brought a group of us – very young people – with Andrew Young and Martin King – across the backroads of Mississippi, Georgia, Alabama as a Jr. High Choir to sing in White Churches in which Martin preached.  We spent the night in the homes of the White Jr. High Choir members before and after the service and after that when we were all quickly hustled out of the homes where we were staying back into the cars to be driven down the road at high speed watching in front of us seeing Nicholas Hood, Andy and Martin hung in effigy from the trees down the road and behind us a group of very angry whites with rifles coming to run out of town the oversexed Blacks who couldn’t be about anything except a sex orgy sleeping with the young White teenagers whose families offered us hospitality.  That was my first experience being seen, not as a human being but as an oversexed machine to whom friendship wasn’t possible – but was interpreted as some kind of sex thing.  Nicholas Hood was there to put all of that into the perspective of the Gospel.

I didn’t realize how much children absorb of Sunday sermons until I looked back and remembered some of Nicholas Hood’s sermons, which got into my soul.  I couldn’t have been more than 13-14 years old.

I’ve made lots of missteps in my life, but somehow I have always been able to self-correct.  Some compass inside always brought me back to the faith of my childhood and the example of those around me at the time.  To be able to see beyond today and to talk to those who are no longer here is a New Orleans thing and not an easy thing to handle,  but Nicholas Hood kept my deepest secrets which were never shared.  That is a gift and I am so very grateful to the giver.

Rev. Hood came to Minneapolis years ago and we spent an incredible evening going over life and where it had taken us.  An evening I have always cherished.  I’ve watched his life and how he lived it and one thing stands out above all else – his faith in God and his steps, which were ordered by God. He lived to the benefit of so many – me included.  Life happens, but it does not always happen full of love while we are doing God’s work.  We can get so confused as to what God is calling us to do.  What is the work we need to be doing for ourselves and for others?  Nick Hood’s life shows an example of someone who was very clear about the work God called him to do.

By your fruits you shall be known.  By what Nicholas Hood was about all those 92 years speaks louder than anything anyone could say, explain, add to his life’s story. By the fruit of his life – “You will know them by their fruits. Grapes are not gathered from thorn bushes nor figs from thistles, are they? 17″So every good tree bears good fruit,” …………  You have left clear evidence by your fruit that you are one of God’s own forever, Nicholas Hood.  May God bless and keep you close for eternity.

Tonight, I Watched My Father Die