Archive for the ‘Piano Factory’ Category 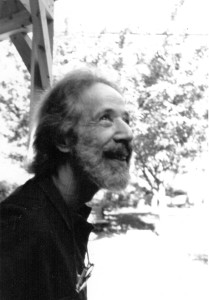 A quote passed on to us by Dorothea Guild as she introduced the exhibit of Nicholas Michael Marinos’s art.   Marinos was Dorothea’s family priest, long-term friend and soul-mate from years past.  He was jazz artist, Greek Orthodox priest, one of the directors at Maliotis Center of Hellenic College in Brookline and at the end – visual artist working in oil, watercolors and more.

The opening reception for the exhibit took place this past Saturday, October 19th.  It was a beautiful success with good food, exceptional music and the introduction by Dorothea Gerros Guild of the art works of one of the two soulmates – one of the two people she cherishes in her life.  The reception -intentionally or not – was about all the things needed to serve as an example for life, love, work, passion to all of us.

The first connection I found astounding was Jackie Cox-Crite’s presence as the guest curator.  Jackie is the widow of Alan Rohan Crite.

Jackie was not only the guest curator, but she was the caterer, promoter and all-around-into-every-part of this exhibit and its opening.

I remember Jackie as a very young person who was Alan Crite’s companion and caretaker.  At the time, she was an artist in her own right.  Her medium was soft sculpture.  Her images and her work showed her innocence and intensity as she took a “woman’s medium” – a kind of quilting and used the medium to turn out beautiful works of art.  She is not the first person to have done that, but at the time, I was particularly struck by the combination of her background, her images, her relationship with Alan Crite and how all of that showed in her art. 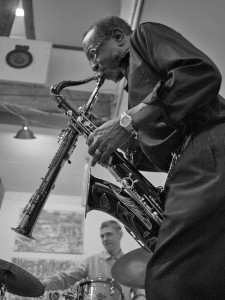 The music at the reception was provided by Arni Cheatham, saxophonist, tenor, flutist, vocalist and very well known in the Boston jazz scene – who is also the soul-mate of Dorothea Guild.  Arni  is helping her in her quest for recognition for the works of Nicholas Marinos.  That is most unusual in this society.  Normally, we lock iron doors and gates against past close personal relationships when a new relationship starts and we  strive to pretend that first, past relationship was somehow defective, not great and here is a list of all his/her faults.

Arni Cheatham provided a reason to attend for those who knew his music, but didn’t know Niko nor his art – and he and his group did not disappoint.  Honored in Boston as a “Jazz Hero” by the Jazz Journalists Association and JazzBoston at – where else – but the South End jazz mecca Wally’s, Cheatham has a long line of acolades, performances, recordings and more.  He currently can be heard at “Top of the Hub” with the Brian McCree Band during November, 2013.

Niko was born in 1928 and was a priest in the Greek Orthodox Church most of his adult life.  He called himself an “Urban/Ethnic Neighborhood artist.”  Born in Tarpon Springs, Florida, Marinos went through tragic losses as a child – starting with the loss of his father in a divers’ accident.  He moved with his family to the Bronx; to the Greek Orthodox Seminary in Connecticut and on to serve a parish in Haverhill, MA. where he met Dorothea and her family and then on to Boston.

What went before in his life as jazz performer, priest, college professor, social activist and more all show up in his body of art works.

“Urban and ethnic neighborhoods hold a very special excitement for me.  This ongoing fascination began when, as a child of the Depression of the 1930’s living in the tenements and growing up on the streets of the Bronx, Queens and mid-town Manhattan, I assimilated the cultural, racial and ethnic diversity of my environment.  These became an indelible part of the fabric of my perception as a painter.

I was then, and am now,   fascinated by the constantly evolving images which spread out before me as I chronicle, through color, the urban environment and its inhabitants in the various ethnic neighborhoods of this city, Boston.  There is an ongoing dialogue between the indigenous environment and the changing demographics of the urban dwellers.  It is this dialogue which always reaffirms the existence of the other that I attempt to record in a variety of perspectives through my art.

I am attempting to capture a moment in time and make it timeless.  And if my art can convey to the viewer that which is familiar, very private, very personal, and, for each, a special remembrance of that place in another time, then I will have succeeded.

Thus far I have works of the North End, South End, Chinatown, Roxbury, Dorchester and downtown Boston including parts of the Back Bay.  These paintings are, for me, a quiet celebration of life found in the urban and ethnic neighborhoods of Boston.”

The evening was an amalgam of Greek Orthodoxy – African American music – and a coming together of the two groups as if they were one because of the art of Nicholas Martinos and the spirits of Dorothea Guild and Arni Cheatham.

Dorothea was stunning in a black embroidered Greek silk blouse, skirt and shoes, all of which were her mothers.  Clothes with a beauty almost unknown today. The image and the symbolism she portrayed in her look was that of a Greek Orthodox priest – it was difficult not to stare because of the richness of her appearance against the backdrop of the Greek Orthodoxy which comes through strongly in Niko’s art.

The community which Dorothea and Arni have gathered around them and who were there to see this exhibit and support their friend was a rare coming together on a very basic level of two communities which normally don’t seem to have many commonalities nor many comings together for any reason.

Maybe in all of this is hope for the rest of us. If we can imitate what is in their lives and values and incorporate a little of the processes which they used to cross many lines without  providing the bridge. (That bridge which is usually a construct used for continued separation of the races.)  Maybe we can all come together and begin to break down those barriers we have built to maintain unreal, unnatural and stilted separations even while we acknowledge and celebrate our original cultural identities.